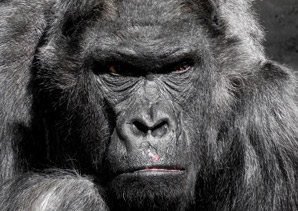 18 Interesting and Fun Facts About Gorillas With Pictures

For centuries gorillas had a lot of myth that surrender them but after some research some facts were discovered.

Where do Gorillas live? Gorillas live in the tropical rain forest of Africa and came from the same predecessors with chimpanzees and bonobos but separated from these other apes to fit into the family of Hominidae 5000 million years ago.

Gorillas may occasional go in search of food in the open grassland, however, they cannot survive outside of the forest.

They are the biggest living Primate weighing up to 600 pounds with their DNA having 98% the resemblance of human more than any other animal. There are two species of Gorillas:

However, the two species are separated by an immeasurable sheathe of rain forest. The Cross River gorilla is the most uncommon type of gorilla with just approximately 300 wild creatures in Nigeria and Cameroon while the Western Lowland gorilla is the most populated among others ranging from 100,000 to 200,000 in number.

Now, here are additional 18 interesting facts about Gorillas you didn’t know (with pictures):

1. Gorillas have arms that are lengthier than their legs and walk on all the four limbs at the same time; this type of movement is known as knuckle walking; knuckles help them to be able to carry their head and the upper parts of their bodies.

2. What do Gorillas eat? This ape sometimes feed on small animals though they are considered as herbivores because a greater proportion of their foods comprises of fruits, shoots, stems, vine, and leaves. It has been observed that Eastern gorillas eat mostly leaves while Western gorillas mainly love fruits. They don’t have need for drinking water because they get the entire moisture they need for their body proper functioning from the food they eat and the early morning dew. 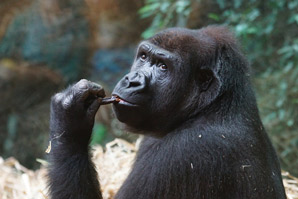 3. The young male are called black back, but as they mature into silverback they leave the troop they’ve been in to form their own family or remain alone.

4. When the male gets to a certain age, starting from 12 years, the hair on his back starts changing to gray, and then to silver. That was what gave birth to the name silverback.

5. The gorillas live in groups of 6 to 12 and that group is known as Troop. In every troop, there is majorly one adult silverback male, then the females and their young ones. The male directs the affairs of his family of female gorillas and their offspring’s. His decisions stand in his group on when to eat, move, rest, sleep and wake up. It is his duty to preserve and keep his family from any danger. Mating with any of the female among his group is not out of his right.

6. How long do Gorillas live? Gorilla could averagely live between 35 to 40 years naturally, but 50 and above when domesticated. Example is Colo, a female Western gorilla, the first gorilla to be born in a zoo, whose 58 years birthday was 22nd December, 2014.

8. The female begins to reproduce from the age of 10 years old and will be having young ones every 3 to 4 years interval.

9. Gorillas have their period of gestation between 8.5 to 9 months similar to humans, their baby

Female gorillas give birth to their young ones.

weighing between 3-4 pounds. The baby gorilla learns to crawl from 2 months and learns walking from 8 to 9 months. The female gorilla nurtures her young ones for about 3 years and can only give birth 3 to 4 times in her lifetime.

10. Gorillas have small ears by the sides of their heads, and have 32 teeth in resemblance to human.

11. They have the possibility of contacting the disease of humans and have five fingers on each hand and five toes on each foot.

12. The individual gorilla could be spotted by his/her distinctive shape on the nose that looks much like human finger.

13. They have well developed brain, which enables them to be able to process information. This makes them to reason freely like human.

14. Where the silverback (male) dies, the troop will break up and look for another group to join.

15. Every gorilla has a different fingerprint just like human.

16. Being active help in preventing their bodies from diseases.

17. Mother gorillas do use a rhythmic gesture to communicate with their young ones.

Gorillas have hands and fingers resembling those of humans.

18. Gorillas are very intelligent animals, which are capable of using tools. They have different means of communication and also have up to 25 various sounds to execute their missions. This could be illustrated when Colo was taught sign language from one year old. By the time she was forty, she had a record of about 1,000 signs, and could understand up to 2,000 English words.