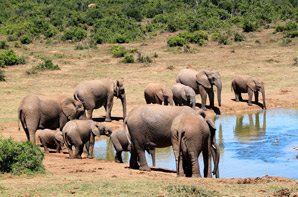 A Herd of African Elephants

The African elephant has a number of special adaptations and features that have progress to support the animal’s activities and ecological needs within specific habitat condition.

The Loxodonta Africana (a scientific name for African elephant) may be characterized by two exceptionally giant ears, a pouch-shaped back simply behind the shoulders, and also the presence of tusks in both male and female.

Currently, the African elephant can be seen in 37 various countries in Africa and is found in threatened species list due to its declining population in quantity as the consequence of the increasing human-elephant conflict.

Records have it that African elephants are of two different species, after series of hereditary tests; it was discovered that they have some unique characteristics that differentiates one from the other.

These elephants are classified into:

The physical variations between the bush and forest elephants are not much whereas their social systems are very similar.

The African bush elephants are more gigantic than the African forest elephants that are mostly smaller, with massive ear and tusks that grow downward.

Forest elephants dwell in the rain forest of central and western Africa and do not cross the province of the Savannah elephants.

In addition to the above facts, here are 15 interesting facts you will find fun about the African elephant: 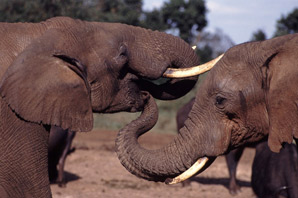 Elephants can also be intimate with each other.

1. African elephants are known by their very big ears, which serve different functions. Their massive ears facilitate the radiation of heat under the hot African sun and could be used to commune directly with other elephants.

2. They have the best gland for smelling among other animals in their kingdom. An arrangement of the upper lip and nose together make up the long trunk. They use their trunk for breathing, smelling, caressing their calves, detecting sensations, grabbing objects, and sucking up water.

3. The tip of their trunk involves two opposable extension or fingerlike development which allows for severe deftness. The trunk is created with more than hundred thousand (100,000) different muscles, this contributes to the strength.

4. Elephants feed on leaves, fruits, grass, bark of trees and bushes, and can consume up to 400 pounds (182kg) daily. Though their systems are not much active in digesting food intake, they could digest just forty percent well.

5. The calves are delivered with the “baby tusks” which later fall off after one year just like the human milk teeth and another grow to replace them permanently. Therefore, it is said to be an elongated succeeding incisors that never stops growing all through the elephant’s life time.

6. African elephants are extremely smart and also have a very massive and exceptionally convoluted pallium, an attribute they share with apes and even humans and a few dolphin genuses. The development of their brain and its complexity is comparable to human brain also, this could be confirmed by seeing the elephant’s cortex with several neurons like that of a human brain.

7. Ivory is made of tusks and because of their unique qualities, the trade for ivory tusks has been in high demand for quite some time now, this has formed a major threat to this wonderful creature.

8. Because of the kind of memory African elephants have, they learn through watching and imitating, and also have some human characteristics like having grudges, remembrance of long-lost friend and relative, and concerned for the injured. 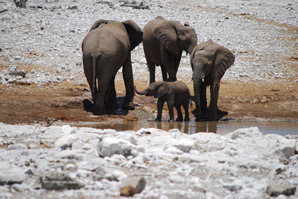 9. The Loxodonta Africana play a significant part in preserving ecological harmony, African elephants eat plants and fruits and excrete the seeds in fertile dung piles as they move about, doing this means new plants will spring up in numerous areas and may cross fertilizer. Not only that, African elephants dig holes to disclose alternative spring, helping smaller animals to have means to water in dry season.

10. Unlike their Asian relatives, the African kinds of elephants are stubborn and are not easy to be used for domestic purpose.

11. The weight of this great and massive creature is 6000kg, that is, the size is estimated to be 10feet for an adult African elephant.

12. Female elephants live together with their baby elephants in family herds of between 7 to 100 related elephants with the oldest as the leader (matriarch).

13. The male elephant leaves the family group of female elephants when he is approaching adolescent age to join himself to the circle of other males or to dwell alone.

14. The female has 22 months of gestation period, after which it brings forth a baby. The delivering of a young one creates joy among the herd and the mother has the duty to care for the young one.

15. Apart from the out grown incisors (tusks) the African elephant has 24 teeth altogether, having a set of six on each sides of the jaw (both on the upper and lower jaw) though the sitting of the molars are fewer numbers compared to those of the Asian elephant.