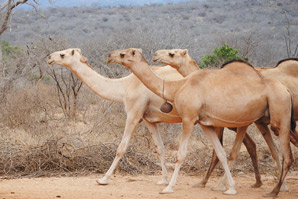 Camels can stay for two months without water.

17 Interesting Facts about Camels (with Pictures)

Do you want to increase your knowledge of the camel? If you do, then you will find this post useful. It presents interesting facts about the camel you may not have known, including pictures that make it so fun reading about the animal.

Camels could be described as creatures from the kingdom of animalia, from the class of mammalian, the family of camelidae, of the tribe of camelini, and of the genus of camelus.

It can further be described as unique kind of mammals with very long legs, a large – lipped snout, and having a distinct stored fat heap on their back known as “hump.

The camels have just two types of species that were able to survive from their family and they are:

There are many amazing characteristics about the camel that makes them fascinating and fun to observe.

Here are 17 interesting facts you may not have known about the camel:

1. Camels are capable of drinking up to 40 gallons of water at once and go for two months without water.

2. What do camels eat? Camel’s lips are always split to aid them in grazing; they could feed on anything plants, bone, and flesh without injuring their mouth.

3. Camels can easily be identified due to their humps; it is a common say that camels store water in their hump, but they actually don’t, rather, they store fat in their hump, which helps them to survive for some period when there is scarcity of food.

Camels cannot be forced to get up when they are relaxing.

5. This mammal is the only one that can be described as having red blood cells in oval shape, which will flow when they are thirsty than clustering like that of humans. This is one known reason camels can stay for long periods without water.

6. Camels lie down each time they feel like resting or sleeping and cannot be forced to get up except they decide to do so.

7. The shape of a camel’s nostrils enables it to preserve water vapor and return it back to the body as fluid. Camels are also capable of closing up their nostrils against sand and even breeze when necessary.

10. When a camel is angry, it uses spitting as a defense. The spit is a mixture of saliva and a greenish substance from the stomach, thrown all over the object of their anger, and it has a very offensive odor.

11. Camels have the ability to control their pregnancies just like humans, based on the circumstances around them, like food, stress, and the season.

12. They can use 12 to 14 months as their gestation period and most deliver one or two. The new born camel usually known as a calf, weighs between 30 and 40kg; they are usually wooly and strong at birth, jumping up and down after some hours they were born. 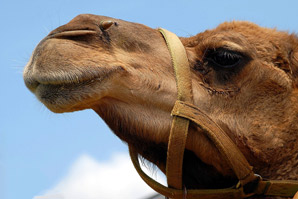 The camel’s split lips help it to eat anything without sustaining injuries to their mouth.

13. At birth baby camels do not have humps but begin to grow it as from one year when they stop feeding on breast milk, though that is not to say that they will leave their mother, they will continue to stay with their mothers for some years. Their training begins when they start growing hump. The training includes carrying of heavier load; at the age of five years they will be able to carry full load.

14. The milk that comes from the camel is preferable health wise to that of the cow because it is lower in fat and lactose and richer in vitamins, minerals and other classes, while its meat is lower in cholesterol than that of the cow. The cholesterol content in camels is insignificant, making them a good alternative to cow. However, the taste of their milk is not pleasant while its meat is not soft but a bit strong and will demand some patience to cook.

15. Camels are sociable animal, they greet one another by blowing in one another’s face; they love dwelling collectively in groups and each group is called herd; a herd is led by a male while the female and their young ones follow.

16. Male camels come together and form what is known as bachelor herd.

17. Camels make varieties of sounds, these include groans and deep, moans, and throaty bellows.

Do you have additional facts about camels? Please, share them in the box below if you do.