Animals are some of the world’s most interesting creatures. They come in various kinds and forms.

Some are so little that you can hold them in your palm, while some are very large, such as the blue whale which weighs up to 200 tons.

Some have wings which help them to fly; others live on land, while some in water, and some both in water and on land.

Animals have very interesting features and behavior that make them stand out and survive in their habitats. These facts are fun to observe, that’s why kids enjoy watching animals in a zoo.

In addition to hunting on land, tigers can also swim very well and can kill a prey in the water. They are mostly active and hunt at night (nocturnal). Using the camouflage which their stripes give them to an advantage, they can easily ambush unsuspecting prey, knocking them to the ground with their body weight, and killing them for food. See more. 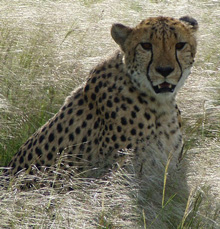 Cheetahs are the world’s fastest land animals. In pursuing a prey, they are capable of accelerating from 0 to 60mph in just about 3.4 seconds and can run at the speed of 65 mph. Cheetahs cannot roar like the other big cats, but can only purr like the cats you have at home. See more interesting facts about Cheetahs.

Elephants are highly intelligent animals with great retentive memory. They can recall events of many years past.

Picture 3: An Elephant and her calf

This enables the leader of a herd of elephants, usually the oldest or sometimes largest female called a matriarch, to lead the herd over a distance of tens of miles to watering holes it knew in the past for water during dry seasons. 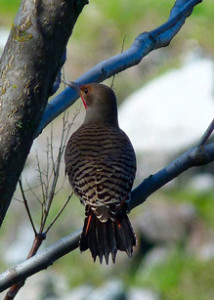 Woodpeckers can make 8,000-12,000 pecks in a day, which means they can peck about 20 times per second when they are not engaged in other activities like feeding, drumming, and excavating nest cavities.

In spite of the heavy pecking, woodpeckers never come down with headache. This is because their skulls are reinforced and structured to spread the impact force, together with the fact that their brains are highly cushioned and protected from the impact. 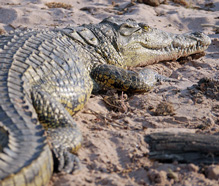 Crocodiles can almost totally submerge themselves in water and still be able to breathe, see, and hear sounds around them. This is possible because their eyes, ears, and nose are high up on the top of their skull. See 14 interesting and fun facts about crocodiles here.

Sea turtles live entirely in the sea except during nesting periods when the female comes out to the shore to make a nest by digging the earth with the aid of their back flippers.

Sea turtles, like salmons return to the same nesting grounds where they were born.

They bury their eggs in it, which can be between 60 and 200 in number depending on the species and return to the ocean.

The eggs hatch after sixty days, and then it takes the young sea turtles, called hatchlings a week to dig themselves out of the nest.They emerge from the nest in the night, and guided by light they move towards the ocean.

They remain in the open oceans, moving to nearshore waters for a few years such as estuaries and bays for protection. More Interesting Facts about Sea Turtles 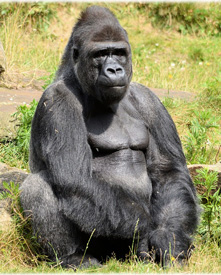 Gorillas’ arms are longer than their legs. They can walk only on their legs, but sometimes they walk on all four limps (hands and legs), a kind of walk described as knuckle walking.

They are usually shy, and are mostly active in the day time. They make their nest at dusk from leaves and plant materials where they will sleep, with mothers usually accommodating nursing infants in their nest. See complete 18 interesting gorilla facts with pictures here. 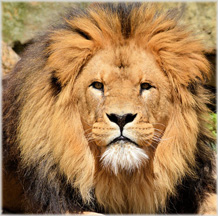 Lions are very social animals and live in groups called prides. In a pride, female lions are mainly responsible for hunting while the male are to establish and defend their territory. See more interesting facts about lions here. 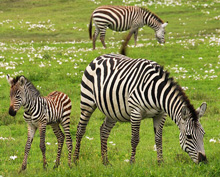 A harem may have a stallion (male) and about six females (mares) together with their young.

Zebras only sleep when they are in groups that can warn them of approaching predators.

And when they do sleep, they do so by standing up. They whine or bark loudly to warn others when they see predators. See detailed facts. 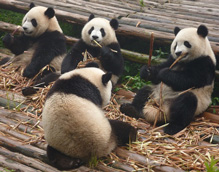 As solitary animals, giant pandas are usually found alone mostly in thick bamboos and coniferous forests where they spend most part of the day feeding.

They do not hibernate, unlike other bears. They move to lower elevations during winter to stay warm, and during summer, they move to higher elevations to get cool. See more. 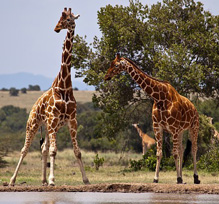 When water is scarce, giraffes can live with it for several days. They remain hydrated from the water in the leaves that they eat.

Their long necks enable them to eat leaves from acacia and other tall trees.

Giraffes don’t have real horns, but a small, knob-like structure on top of their heads which helps in protecting their heads from injuries during a fight. See giraffe facts. 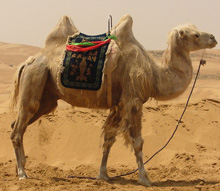 Picture 12: A camel in the desert

Against what many people think, it is not true that camels store water in their humps.

A camel’s hump is actually a deposit of fatty tissues.

Considering the extremely hot habitat it lives, the camel needs to free its body of fats so to be able to easily release excessive heat from its body and stay cool.

It therefore sends most of its body fats to its hump. See detailed camel facts. 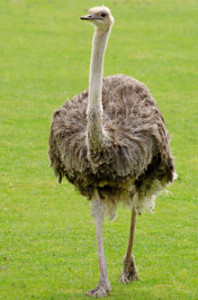 The ostrich is the world’s fastest running animal with two legs. It can run at a speed of 70 km/hr and cover a distance of five meters in one stride.

Instead of running away when in danger, an ostrich can also use its powerful legs as a deadly weapon. A kick can kill a lion or other predators. See more interesting facts about ostriches.