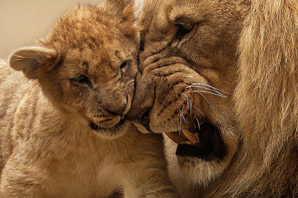 A male lion and a cub

This post provides interesting facts about the African lion you are sure to find really informative and fun. Lion pictures are also included to make learning about this animal enjoyable.

The African lion is from the kingdom of animalia and classified as mammalian, order of carnivores, a member of the family of felidae, the subfamily of pantherinae, and of the genus of panther.

The scientific name is panther leo; this lion is said to be the second largest among the wild cat family aside the tiger with a tawny color.

They are nicknamed “the king of the jungle” and are used as symbol of strength, encouragement, and velocity.

There are lots of facilitating characteristics about the African lion; here are 19 interesting facts you may not have known about this amazing animal:

1. The adult male African lion can be identified by their manes which they are normally coated from tawny to black. The mane goes round about the neck of the male lion and serves as protection to them when they fight, the darker the mane gets, the older the lion becomes.

2. What do African lions eat? African lions do munch on both medium and large sized prey like the wildebeest, zebra, gemsbok, buffalo, and others.

3. Where do African lions live? This animal could be seen living in places like open plains, semi-desert, thick bush, and woodlands, but do not live in forest.

4. It is a general thing among lions and lionesses to use urine to scent mark the area they occupy. Also, roaring is another signal they give, telling others to stay clear. The roar of a lion can go as far as 8km, advertising their locations to others.

5. These big cats technically kill by targeting the throat of their prey to hold and strangle, or by fastening their mouth over the muzzle of their prey.

6. The attacks of the lions are mostly successful in long grasses and thick bushes, and also when the targeted prey is alone, and when they stalk closer, especially on dark nights. 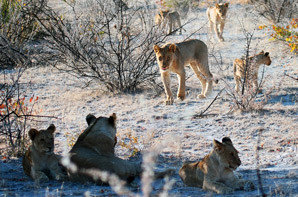 8. Lions can move at a speed of 81km per hour for a short distance though the male is larger than the female.

10. African lion are sociable in that they mostly walk in groups called pride, which is made up of three male lions and related lionesses and their cubs. They are the only cat that usually does hunt in a group.

11. Some of the reasons why the lion form groups are for the female to safeguard their younger cubs and to also ensure enough number to successfully capture big and potentially dangerous prey.

12. Whenever a male and a female lion separate themselves from the pride group, it is most likely they are mating. The male lions can detect when a lioness in the pride is sexually responsive, this is possibly by the scent that proceed from her.

13. For 2 – 4 days once in every two years the female lion becomes sexually approachable and mating could take place multiple times. In fact, mating can occur up to four times an hour, nevertheless, none of them last more than a minute.

14. In spite of the frequent rate of mating, only two to three result to conception. The lioness ensures she conceives for a healthy lion; the gestation period is 110 days and the male are greatly involved in the protection of the cubs.

15. Lions sleep mostly in the day for up to 20 hours for the male lions and about 15-18 hours for the female. They mostly avoid hunting in the day due to the heat of the day. However, they are majorly active in the night when they can easily sneak up to grab their prey without being detected.

16. In most of the pride communities, the hunting is mainly left for the females because the mane and the bulky size of male lions make them more obvious for preys to sight and escape. As a result of this, the male lions are less successful at hunting. These make them to depend mostly on the effort of their lionesses. 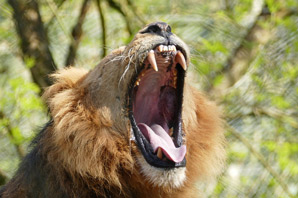 Lions roar to keep others away from their territory.

17. However, this does not mean that male lions lack hunting skills because they still fend for themselves, especially when they are displaced from their pride.

18. When there is a successful kill, the male over shallows the lionesses and could even drive them away from the meat, during this time the feeding on the meat is survival of the fittest.

19. From time to time the pride is taken over by other groups of male lions, who intrude into the group, overpowering the males in it and driving them away from the group. The new lions in the pride might kill any cub they meet there.

Do you have additional fun and interesting facts about the African lions? If you do, please go ahead to share it in the comment box below.