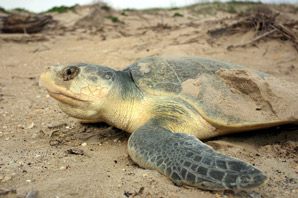 The kemp’s ridley sea turtle has a triangularly shaped head.

This post provides interesting and fun facts about a type of sea turtle called the kemp’s ridley sea turtle. If you desire to learn something about this sea animal, then read on ….

Kemp’s ridley sea turtle is from the kingdom of Animalia, from the family of Cheloniidae and from the genus of Lepidochelys.

The scientific name is Lepidochelys kempii and another name for it is Atlantic ridley sea turtle; the one of two surviving species in the genus of Lepidochelys, this animal is also classify as reptile.

The name kemp’s was take after the man Richard Kemp who facilitated the study of turtles, though the origin of the name ridley was not ascertained perhaps the name was gotten from olive ridley since they both have comparable nesting behavior.

The kemp’s sea turtle is the least among sea turtles with an average of 80cm long and weigh 45kg; they could be mistaken for some bigger turtles that have the same resemblance.

This turtle has passed through serious population decline for years, in 1940s we had about 40,000 breeding female but today we have just about 1000 left.

There are lots of interesting and amazing facts to learn about the kemp’s ridley sea turtle; below are 15 of them, do enjoy and have fun:

1. The shell has five pairs of coastal scutes and four pairs of inframarginal scutes that are pierced by a pore on the plastron.

2. They have gray heads with the shape of a triangle; two couples of prefrontal scales and a hooked beak with massive pressed surfaces.

3. This reptile has limbs that appear in form of flipper shape with one claw at the front flippers while two claws emerged on the hind flippers.

4. Ridley sea turtles are non-deep water benthic feeders and have a very strong jaw which enables them to grind their prey.

6. How long do kemp’s ridley sea turtles live? Kemp’s get sexually mature between the age of 10 – 12 year and their lifespan is up to 50 years.

7. The kemp’s babies are black on both sides

8. Kemp’s ridley could nest between one to three years at intervals and also nesting is done in mass corresponding nesting known as arribadas. The nesting is done 2-3 periods during a season at intervals, with an estimate of 100 eggs in a season, observing 10 to 28 days. All together, nesting and incubation takes 45 to 70 days period.

9. This biological process is roughly going to last for two years or till the turtles reach an exoskeleton length of about eight inches, at which period the sub-adult turtles come to marine habitat of the Gulf of North American country or northwestern ocean where they feed and continue developing until they attain maturity level. 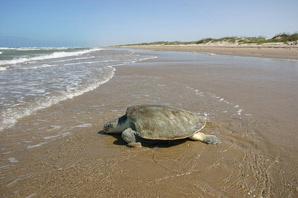 10. They are the only species that nests mostly during the day and also nest in mass just like their family member the olive ridley.

11. The kemp’s has been listed as the most endangered of all sea turtles, apart from the human predators, this turtle also have other predators especially as the hatchlings are making their journey from their place of birth to the water, most of them could be devour by dogs, seabird or other animals. They are also mistakenly caught in fishing nets.

12. Their greatest threat is human exploitation of their eggs, meat, and other parts. Eating ocean turtles and their eggs, like kemp’s ridley may lead to severe sickness and even death, particularly to youngsters. It has been discovered that the flesh contains chelonitoxin which could cause different kinds of diseases with nausea, vomiting, diarrhea, burning sensation of lips, tongue and mouth; chest problem, skin rash, and death.

13. Where do kemp’s ridley sea turtles live? This reptile loves staying in shallow water area that has sandy or muddy underneath.

14. They could be found in the Gulf of Mexico and beside the Atlantic coastal north of Nova Scotia.

15. The sex of the baby is determined by the temperature of the atmosphere at the time of incubation.

Do you have additional facts about the kemp’s ridley sea turtle? If you do, please share it in the comment box below.