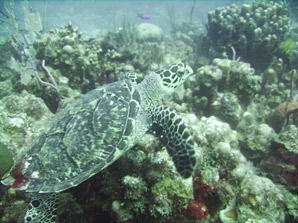 Do you want to learn some interesting and fun facts about the amazing hawksbill sea turtle? If you do, then you will enjoy this post, which also provides cool pictures about the animal.

Read on and have fun….

Hawksbill sea turtle with the scientific name Eretmochelys imbricate is from the kindom of Animalia, from the class of reptile, the family of Cheloniidae and of the genus of Eretmochelys.

They are one of the surviving members of the group of reptiles that have been in existence for over 100 million years. The name “HAWKSBILL” was derived from its narrow head with a sharp bird-beak.

The hawksbill has some slight resemblance with other sea turtles; however there are some other remarkable differences between hawksbills and the other sea turtles. Apart from the head, the jaw is hollowed out, and the arm is the flipper with two claws.

They are one of the smallest of the turtles, with weight ranging between 40 – 70kg and length 1m (3ft). They have this unique feature of the shell alternating the color along with the temperature of the water.

There are other interesting characteristics to be learnt about the Hawksbill; below are 22 amazing facts about the hawksbill that are really fun to behold:

1. What do hawksbill sea turtles eat? They feed on sponge and are not healthy for human consumption because of the toxic chemical substances that sponge contains; they also eat invertebrates.

2. The narrow head and jaw curved beak enables them to get food from crevices in interior reefs.

3. The shell is made up of large, hard, and bonny scale overlapping and without ridges. The carapace is oval shaped and gracefully colored.

4. Hawksbills have profrontal scales on both sides of their eyes.

5. Research has shown that they make long migration from feeding locations to nesting sites.

6. Where do hawksbill sea turtles live? This animal is seen living in tropical seas like the Indian Ocean, Pacific Ocean, and the Atlantic Ocean. Most of their lives are spent in shallow water habitats.

8. Countries around the world have prohibited trading on hawksbill, yet their eggs are still in high demand in the market. 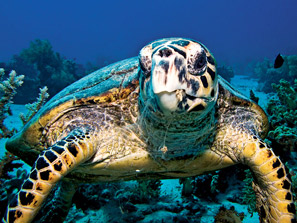 9. The male hawksbills have more elongated claws, bulky tails and a bit lighter in color more than the female counterpart.

10. The tough shell defends them from predators, nevertheless, they still have sharks, crocodiles, and big fishes predating on them.

12. Nesting process starts with the female reptiles leaving the sea to return to their natal beach to lay their eggs, which range between 6o and 200 eggs.

These they do by digging a hole in the ground, lay their eggs and cover them up, then return to the sea; when the eggs get to about 60 days, they begin to hatch. Nesting could occur up to four to six times in a single season.

13. The sex of the baby hawksbills is determined by the prevailing temperature of the atmosphere during the incubation. When the temperature is soaring, the eggs give birth to female while low temperatures give chances to male. Apart of determination of sex, the temperature also aid in building the embryo and also plays important role in their growth.

14. The young hawksbills are sometimes black or very dark brown and also have light brown or yellow color at the rim of the shell.

15. Hawksbills are the fastest turtles among the sea turtle; when it comes to nesting, the process could take them about 45 minutes.

16. The most unsafe period in the life of hawksbills is when hatchlings (baby hawksbill) move from their nests to the sea; they are always preyed on by ravaging crabs and flocks of seabirds. For this reason not many of them survive to adulthood. In fact, 2/3 of the hatchling dies before they get to maturity.

17. How long do hawksbill sea turtles live? Hawksbill’s maturity starts about 20 years, though the lifespan is not known yet

18. By eating sponge, they play essential role in the reef community by contributing to the growth of coral. 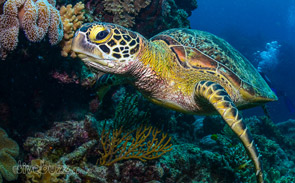 19. This turtle is one of the commonest of the group and could be seen in almost all marine environments.

20. Their unique shell and paddle-like flipper qualify them as very fast swimmers, swimming at 24kph. The mother hawksbill has been observed to make 500 moves at 12 hours.

21. Hawksbill’s are in the list of the most threatened turtles by human.

22. This sea animal has the ability to rest and sleep below the water for many hours and show up later above water for some minutes.

Did you find these hawksbill sea turtle facts interesting and fun? Please, leave a comment in the box below. You can also share additional facts and pictures of this really cool animal.