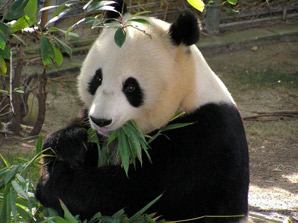 The giant panda is one of the world’s cutest animals judging by its appearance and its displayed characteristics.

If you are excited to learn about the giant panda, this post presents interesting facts about the animal you will find revealing and fun; it also shows cool pictures of the animal to make the learning even more interesting.

Giant panda is from the kingdom of animalia, from the family of Ursidae, the genus of Ailuropoda, and is in the class of Mammalia.

The scientific name is Ailuropoda melanoleuca which implies black and white cat foot. The giant panda can also be referred to as a bear because it has a bodily feature of that of bears.

Now, here are 21 amazing and fun facts about giant pandas you may not have heard about:

1. What do pandas eat? The large pandas have giant molar teeth and powerful jaw muscles for crushing powerful bamboo, which happens to be 99% of their food, though they still feed on fishes and small animals occasionally. When panda are in captive they eat things like sugarcane, rice gruel, bamboo, carrots, biscuit high fiber, sweet potatoes, and apples.

2. The giant panda can be identify by its black fur on their eye patches, ears, muzzle, legs, and shoulders, while the remaining parts of its coat is white.

4. The first giant panda that was ever born in the zoo was born in a Beijing zoo in 1963.

5. Pandas can also be as dangerous as the other bears. 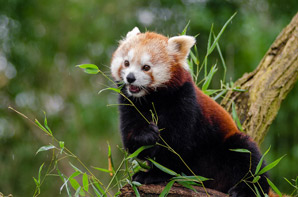 Pandas give birth to their babies and feed them on milk.

7. Where do pandas live? Their thick wooly coat keeps them warm within the cool forests of their habitat; the animal does not hibernate during very cold weather condition this is because the bamboo they feed on will not allow them to store fat that will help them in winter season. As a result, they take refuge in caves or hollow trees during the winter period.

9. Giant pandas are heavy eaters, consuming within the range of 20 to 40 pounds of bamboo in order to get all the nutrients needed.

10. They use 12 to 16 hours daily to search and eat bamboo while the rest of the time is used mainly for sleeping and resting.

11. Bamboos have 50% water in its contents and new breeding ones have 90% water, yet the quantity of water in bamboos are not sufficient for pandas, they drink more water from rivers and streams.

12. How do pandas reproduce? Pandas get to reproductive age from 4 to 8 years of age and could still be reproducing till twenty years. The female pandas could ovulate just once a year within two to three days, which are the only days they will be able to conceive.

13. After conception, it takes the female bears 95 to 160 days to deliver, thereafter, the baby panda, known as cub dwells with its mother for one and half to three years and then move away to leave on their own.

14. The newly born cub is feeble and dependent, and at this the mother plays a very significant role in helping him/her.

15. At birth, the new panda does not weigh more than five ounces. They are pink colored, without hair and blind; they are 900 times smaller than the size of their mothers.

16. The giant panda gives birth to the smallest baby of all mammals compared to the size of its mother. The new born is blind and without teeth, and has a long tail; it stays for up to six to eight weeks before it can open its eyes.

17. Panda cubs are not able to walk until three month later; they are normally being nursed for 8 – 9 months.

18. Giant pandas give birth to one baby at a time, but where she happens to deliver two cubs she will concentrate on the stronger one and deliberately ignore the weaker one because she does not have the energy to cater for both of them. 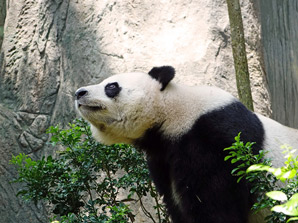 19. The pandas have digestive system of the carnivores, which is the reason they can only digest 20 to 30% of the 99% of the bamboos, they consume, and that is why they are always eating to get sufficient nutrients to survive.

20. The giant pandas are uses as an emblem of peace in China; it is regarded as a national treasure.

21. Pandas depend on spatial memory and not on visual memory when it comes to the issue of locating their mates’ area.

Giant pandas are beautiful animals to see, with a display of interesting characteristics. Hope you had fun reading the facts about the animal shared in this post.

Do you have additional facts about the giant panda? If you do, please share it in the comment box below.