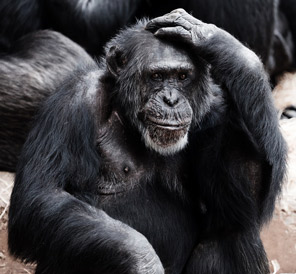 Chimpanzees have striking resemblance to humans.

21 Interesting Facts about Chimpanzees that will amaze you

This post presents interesting facts about the chimpanzee that you will find both fun and informative. It also shows pictures of the animal that makes learning about it easy for everyone, including kids.

The chimpanzee is one of the four species of ape. They are very unique and intimately related to human – we share about 98% of our DNA with them.

Some fascinating facts to consider are as follows;

2. The chimpanzee is also threatened by diseases such as hepatitis B, measles, influenza, ringworm, etc. that affect humans. They eat plants that are medicinal for healing whenever they are sick.

3. Chimps have very long arms that are longer than their legs and a shorter body, while baby chips have tails that are white with tuft, which will vanish as they grow into adulthood.

4. How long do chimpanzees live? Chimpanzees can live up to forty to fifty years in the wild, while in the zoo they can exceed fifty to sixty years.

5. This ape is different from monkeys in several ways, for example, they do not have tails, do have a much bigger and more developed brains, and can walk erect for a longer period of time.

6. What do chimpanzees eat? Chimpanzees are categorized as omnivores animals because they eat both flesh and plants, such as seeds, nuts, fruits, tender shoots, insects, flesh, and young monkeys. Chips equally drink water by using chewed leaves as sponge to sop up the water.

7. Where do chimpanzees live? Chimpanzees can be found in twenty-one different African countries; they like to live in thick tropical rain forest habitats. However, they can also be found in areas like smaller forests, bamboo forests, open savannah, woodlands, and swamps. 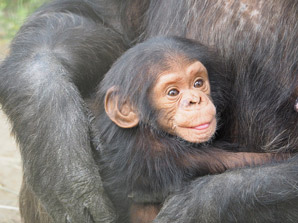 Chimpanzees give birth to their babies and feed them on milk the same way as humans.

8. Female chimpanzees give birth to their younger ones at an average period of about three to five years interval in the forest and do normally give birth to one baby at a time, twins are rare.

9. They are fully mature for procreation at the age of 12 to 13 years; the female’s period of gestation last for 8.5 to 9 months.

10. When the baby chimpanzee is weaned, it begins to construct its own sleeping nest itself and will not be sharing that of its mother; young chimps do live with their mothers for an approximated period of seven to ten years.

11. The female ape of chimpanzees is very good, cautiously nurturing their young ones; baby chimpanzee enjoys taking hold of its mother’s fur to ride on her back as from 6 months.

12. Chimpanzees are known to be social animals which are lively during the day. They live in small and steady units called communities with 40 – 60 individuals, while from time to time smaller subgroups of 6 – 7 will gather for a while. In every community they have a male leader known as alpha – that is the highest male.

13. Chimpanzees make their sleeping nest individually daily. They make sure the nest they sleep on today will not be used tomorrow. Their nests are in bowl shape and are made up of leaves and other plant materials.

14. Younger chimps play a lot, learning different skills in the process that they will use when they get to adulthood; they practice things like making of sleeping nests, using tools, climbing, and wrestling.

15. Chimpanzees are 6 to 7 times stronger than humans and can easily learn human languages when they are in the zoo.

17. They express feelings similar to that of humans, including depression, boredom, pleasure, grief, joy, anger, and sorrow, and can also encourage and comfort one another. This they do by kissing and embracing.

Chimpanzees’ teeth are designed for the animal to eat both plant foods and flesh.

20. Aged chimps in the zoo usually have cardiac diseases and do use the same drugs like humans.

21. The body temperature of chimps is also same as that of humans, which is 98.6O.