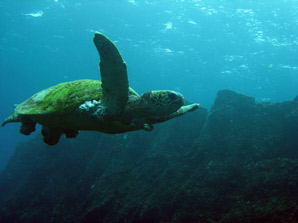 Green Sea Turtle in the water.

This post provides some facts about the green sea turtle you will find interesting and fun to improve your knowledge of the animal.

The green sea turtle is one of the oldest creatures that have lived more than 100 million years and is seen as the biggest among the hard shell sea turtle because of the size, which is 1.5meters (5ft) long and weighing more than 300kg (690lb).

They can simply be differentiated from other sea turtles by having a single pair of prefrontal scales (scales in front of their eyes) compare to the rest that have the scales on both pairs of the eye.

Though it has not been generally accepted that the green sea turtle are of two kinds, however, it can be considered as two subspecies, which are:
i. Atlantic green turtle and
ii. Eastern pacific green turtle

The Atlantic green turtle is found all over the Atlantic Ocean while the cousin relation of the green turtle are found in the India ocean, Black seas, Mediterranean, and the Pacific ocean habitats.

Here are 19 interesting and fun facts about the green sea turtle you may not have learnt before:

1. The green sea turtle came about that name from the greenish colored fat beneath the shell and not the color on the shell.

2. What do green sea turtles eat? When they are still growing they feed on aquatic insects, worms, grasses, algae, and young crustaceans, but when they get to 8 to 10 inches length they will be sternly herbivores feeding on sea grasses, algae, sea-weeds, and other forms of marine plant.

3. It is often hard to distinguish between the male and female turtle because both are almost the length and weight

4. They do not have teeth rather they have sharp beaks which they use to cut and tear their food.

5. Green turtles are grouped together with snake, crocodiles and others as reptiles. This turtle are cool blooded reptile that spent most of their life inside water; this makes it slightly difficult to gather much information about them.

6. It is difficult for them to pull back their head or limbs and feet back into the shell, they have very hard neck skins which protect them against their predators.

7. They have a salt gland near both eyes and from time to time, clear off excess salt as they drink sea water; during which they appear to be crying.

8. How long do green sea turtles live? The green turtle can live between 50 – 80 years. However, the percentage of the new hatchling to adulthood is very low due to different threat from other animals.

9. The front limbs are well designed flipper shape which enables them to be good swimmers while their back feet are use at the same time as rudders.

10. The female among this reptile get sexually matured when they get to between 25 to 50 years old

11. Within 2 – 4years the female green turtle, particularly in the night, crawl back to their natal beaches for nesting. Their eggs are more or less circular and could lay up to or even more than 100 eggs at once.

12. Then after about two months approximately, the eggs hatch and the baby turtle crawl down into the sea and spend what is known as “a lost year” meaning they will spend one year inside the sea. 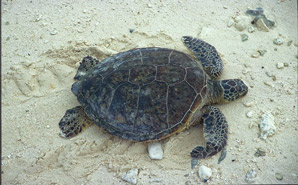 Green Sea Turtle on the sand.

13. The temperature of the soil where turtle nest will decide the sex of the little turtle inside the egg, as below 30 oc seen to be male while above 30 oc are female.

14. It is difficult to estimate the numbers because the young ones and the male do not return to shore once they find their way into sea.

15. Human is a major predator facing this reptile, for the want of their eggs and meat for consumption while their shell is used for leather.

16. The green sea turtle is enlisted by US and the IUCN Red list around the world as one of the most threatened animals.

17. Where do green sea turtles live? The Chelonian Mydas lives in different parts of the world like Costa Rica, the east and west coasts of Florida, Caribbean, and off the Pacific coast of Mexico.

18. They take in oxygen and could hold their breath for some hours inside colder water habitat with their heart beating at interval of nine minutes.

19. The turtle feeds on sea grass (eating the leaves shunning the roots), thereby increasing the health statues of the plants, enables them to grow faster.

Do you have other interesting facts about the green turtle? Please, share it in the box below.

Any cookies that may not be particularly necessary for the website to function and is used specifically to collect user personal data via analytics, ads, other embedded contents are termed as non-necessary cookies. It is mandatory to procure user consent prior to running these cookies on your website.