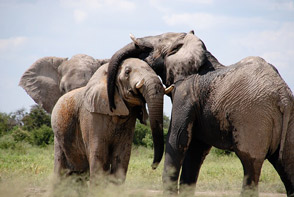 16 Interesting Facts about Elephants with Pictures

This post provides interesting and fun facts about the elephant you may not have heard about. It also includes some interesting pictures that bring out the amazing characteristics of the animal. Enjoy it!

Elephants are interesting animals, and are vastly elements of popular culture and show up as similes across all media.

They form part of moral beliefs and often associated with knowledge and altruism.

On the other hand, many people are unacquainted of the various fascinating facts regarding them.

However, two species of this mammal is conventionally recognized;

Where do elephants live? The Asian elephants though not as big as the African elephant, live in large numbers in forests habitat close to water source and grasslands.

The cousin elephants from Africa have some facts suggesting that Africa has two different species of elephants:

African bush elephants and African forest elephants. African male elephants are the biggest of all land mammals on earth; they average the shoulder height of 4m (13ft) and weigh 7,000kg (15000 lb).

In spite of obvious similarities, there are considerable disparities between Asian and African elephants with which you can distinguish them from each other.

Nevertheless, there are some amazing characteristics and features we will consider about this fascinating animal:

Baby elephants: Young elephants are cared for by the entire herd.

1. Elephants are mammals that walk in chains, more especially the female elephants; they group themselves in a close family ties and also dwell together in family groups of related females, which is called a herd. The herd is made up of 8 – 100 female elephants. The herd is usually led by the oldest or sometimes the biggest female with experience among the herds and she is called matriarch.

2. Elephants have outstanding memories; this is displayed during the time of dry season when the matriarch would have to lead the herd to a very long distance to places with water she has been to before. Elephants are said to have cognitive maps which enables them to remember extensively places they have been to after a long period of time.

4. What do elephants eat? Adult elephants can eat up to 300 to 400 pounds of food and drink 160 liters of water a day; they are herbivores animals, meaning that they feed on vegetation.

5. When a baby elephant, which is called a calf, is delivered, it is taken care of and sheltered by the entire matriarchal herd but when the calf is a male, he leaves the family component from the age of 12 to 15 years to start up his own life.

6. The calves weigh 260 pounds, though they are born blind, it doesn’t stop them from standing shortly after birth.

7. Elephants’ tusks are very expensive; tusks weighing 200kg may sell for as much as 441 pounds; that is the reason they are threatened by man who wants their tusks.

8. Do you know that female elephants have the longest reproductive period among other animals and may carry pregnancy for two years? This is to enable their unborn offspring to develop properly, more especially their trunk and brain.

9. Their skin is so sensitive that they can feel the perch of flies on them.

10. Distinct from most mammals that grow baby teeth and change them with one life time of adult teeth, elephants have a peculiar way of growing their teeth. The tooth replacing grows out at the back side of the old tooth and continues to press on the old until it falls off.

11. Elephants can easily distinguish men from women and even people of different ethnic background by mere hearing their voices.

12. They do not digest most of their foods; as a result of this some other animals may go in search of seeds from their compost. 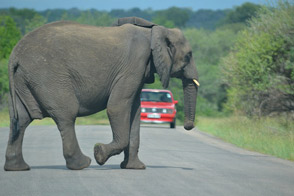 13. How long do elephants live? Lang Wang, an Asian elephant died at the age of 86 years more than the life span of an average elephant which is not more than 70years.

14. Elephants can generate numerous kinds of sounds; however the popular one is the trumpet which they make when they are in happy mood, aggressive, or in grief. They can equally hear the trumpet call of other elephants more than 6 miles (8km) afar of.

15. Elephants have feelings like humans, they even cry when they lose or remember the loss of their loved ones. You could see the display of emotion by elephants some years ago when Lawrence Anthony, the Elephant Whisperer, died and a herd of elephants matched to his home.

16. They use touching as another form of communicating to each other, they greet each other by wrapping their trunks and stroking. The elderly ones use the trunk-slap, shove, or kick to discipline the younger ones. Touching is also crucial between mother elephants and their calves.