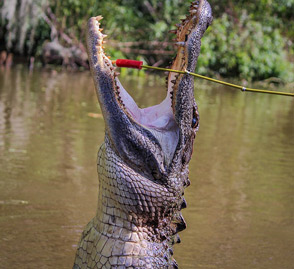 17 Interesting Facts about Alligators with Pictures

Interesting and fun facts about alligators, with pictures, also for kids!

This is an animal that can easily be mistaken for a crocodile due to both having similar features.

The Spanish that settled early in Florida called it el lagarto, meaning “the lizard”. Thereafter, the English word used was allagarta and alagarto, and later it became Alligator. Its existence was noticed 37million years ago in the oligocene era.

There are two kinds of species of the alligator:

Here are 17 facts about the alligator you will find interesting and fun too:

1. The American alligator is massive in size; it weights up to 360kg and grows more than 12ft in length, while the Chinese alligator is smaller in size, weighing only 22.3kg with its length between 4.6ft and 4.9ft.

2. A gator has a long tail, which is half of its length; the tail helps it to swim as fast as 20 miles per hour (mph) or more inside the water.

3. Where do alligators live? The American gator lives mainly in freshwater parts of the earth like rivers, swamps, ponds, and even in briny habitats while the Chinese kind is mostly kept in the zoo for fear of being hunted.

4. Another amazing fact about this reptile is that they are social being that like gathering together in a group from time to time and that group is called congregation.

5. What do alligators eat? Alligators are known to be carnivores; the kind of food they eat depends on their size and their age. The smaller ones feed on earthworms, insects, fishes, and snails.

And as they advance in age they feed on lower animals like birds, fishes, and other mammals. They also love eating fruits. Unlike the crocodile which sees humans as prey, alligators could only attack people for self defense.

6. The adult gators have between 74 to 84 teeth and can re-grow any that breaks off. They can grow more than 2000 teeth within life time.

7. Female alligators have the quality of guarding and caring for their eggs and offspring up to the age of one to two years.

The female gator starts by making a nest for her eggs; after laying the eggs keeps watch over them for 65 days incubation period.

The young ones make high-pitched noises (egg tooth) from inside their eggs, indicating they are ready to come out.

The mother tenderly carries the eggs to the water through her jaws for them to be hatched, thereafter, she keep on protecting her pod of hatchlings for some period.

8. Gators become sexually matured at 6ft (1.8m) in length; mating period is in late spring. The adult alligators form groups of bellowing choruses, which they do a number of times a day usually after sunrise. During these seasons, the gators gather in massive number for group courtship called “alligator dance”.

9. Alligators are heavy eaters; they can eat up to 25 percent of their body weight in a sitting; their long bodies make them to consume more than their stomachs required; though they have a unique kind of blood vessels (second aorta) that is capable of moving blood away from their lungs to their stomachs, energizing the manufacture of well-built stomach acids to break down their food faster.

10. Alligators are very much distinct from crocodiles, particularly from the head; gators have wide u-shaped snouts while crocodiles have v-shaped ones.

On a closer view, you will notice that the jaw at the upper side is a bit wider than the lower jaw; it aids the lower jaw tooth not to be visible when the alligator closes its mouth.

11. Gators are darker in complexion when compare with crocodiles; not as much webbing on their feet, no tassel on their hind leg, and are less violent that crocodiles.

12. How long do alligators live? It is said that alligators can live up to fifty years, however, their life span has not been determined yet since the one-year-old gator brought into the Belgrade zoo (Serbia) 77 years ago (now 78 years old) is still alive.

13. They are cold-blooded animals and so cannot regulate their internal body temperature. If they want to warm up, they look for a sunny spot.

Also, they do not have heat gland. Therefore, to discharge heat from their bodies, they open their mouth, look for a cool place, or go for a swim.

14. As at when the eggs are laid they do not have any particular gender associated to it. The sex of baby alligators is decided by the temperature of the prevailing atmosphere at the time of incubating the eggs.

15. Though gators do not have vocal chords, yet they are chatty animals using different kinds of bellows, hisses, roars, and growls.

16. Gators also have resemblance of the crocodile in crying “the crocodile tear”. This they do to clean and moisturize their eyes.

17. Alligator’s skin could be use for making luxury items.