16 Interesting Facts about Ostriches you didn’t know (with pictures)

Binomially called struthio camelus, an Ostrich is a bird that is amazingly endowed with rich qualities.

Among birds, an ostrich stands uniquely tall and it showcases a slightly fierce behavior when troubled by a predator, as seen in the way it chases humans and other predators in documentaries.

One major feature of the Ostrich that strikes us at the mention of its name is its extremely long thin neck and legs.

Aside from this familiar feature, however, there are still other notable possessions and characteristics that make the Ostrich rich.

Below are 16 interesting facts about this amazing bird; they are fun too for kids:

1. Where do ostriches live? Wild ostriches are found in the desert and savanna habitat, and in open forests of central and southern Africa.

Kudos to the Ostrich’s commercial industry: farm raised ostriches have also been found all over the world, after they suffered continuous threats from humans for their fashion-like feathers in the 18th century.

2. What do ostriches eat? Ostriches are omnivorous birds; they eat anything they see. They feed more especially on plants, roots, and seeds and eat little animals like rats and lizards.

3. To grind their food, the toothless ostriches swallow pebbles. Moreover, in its stomach, a full grown ostrich carries approximately 1kg of stone.

4. Different from all other birds, an ostrich discharges urine and faeces apart.

5. Just like Camels, ostriches can endure a hot weather and survive without drinking water for days.

These similarities they share with camels (among which are their long necks, legs, and tallness) are also signaled by the ‘camelus’ in their binomial name.

6. Among land animals, ostriches have the largest eyes, which are about 2 inches. These large eyes help them to sight a predator clearly from a very far distance. 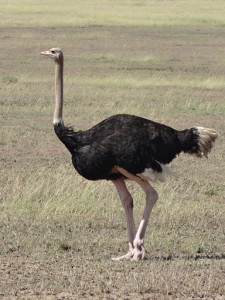 7. There is a popular erroneous conception that an ostrich can bury its head in the sand in order to hide from a predator.

An ostrich does not do this; rather, what it does when it sights a predator very close to it is to put down its head against the sand so as to assimilate with it.

After doing this, only its body becomes noticeable and it appears as if it has buried its head in the sand from a distance.

8. An ostrich is the largest and heaviest bird. It grows up to 10 feet tall and weighs about 400 pounds.

9. Ostriches are non-flying birds. Nature, indeed, has a way of ensuring perfection; if not, one would wonder how scary this large bird will look when flying in the air.

Also, ostriches are the fastest among birds. In one hour, an ostrich can achieve a running speed of above 40 meters.

For a long period of time, an ostrich can keep up with a speed of 30 meters per hour. With this, they can get away from most predators.

10. Ostriches are very social. Most times, they come together in flocks of 10, and sometimes, close to 100.

A male ostrich guards their territory and a female ostrich named the “main hen” gives adequate support to this territory.

11. An ostrich has two toes on each of its foot, as opposed to all other birds which have three or four.

Moreover, on each foot, an ostrich has a 4-inch nail which it uses to guard itself in times of trouble.

With its strong legs carrying these toes and strong nail, an ostrich’s kick can kill or injure a lion badly.

12. Male ostriches are black in color and they have white wings and tail feathers, whereas the females are brownish-gray.

An ostrich is not sexually mature until it reaches 2-4 years old. Ostriches have an incredible way of mating.

To mate with the female ostrich, a male ostrich flattens to the ground, shakes its wings feathers and moves its tail upward and downward so as to catch the attention of the female.

The female will in turn reciprocate if it is impressed.

13. As rich as these feathers of ostriches are, they are not waterproof.

This is because ostriches do not have a required gland to oil these feathers like all other living birds. This seems to be one out of their few weaknesses.

With this, one egg of an ostrich is as heavy as two dozens of a chicken’s eggs. 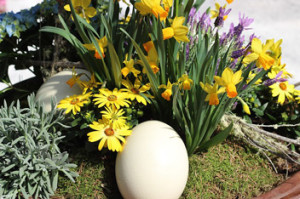 When the eggs are hatched (taking close to 40 days), the chicks leave the nest after a few days to take a long walk with their parents.

At birth, a chick is equivalent to a full grown farm-raised chicken.

16. The Ostrich is a symbol of pride, tallness, great height, luck and fertility.