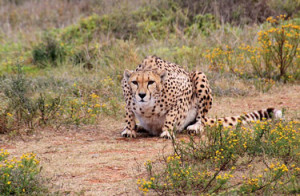 16 Interesting Facts you didn’t know about Cheetahs (with pictures)

This post presents some of the most interesting facts about the cheetah to increase your knowledge of the animal. It also includes pictures that bring out the characteristics that make cheetahs fun to behold.

Interestingly, the name ‘cheetah’ itself phonologically signals a ‘cheater’ or ‘cheat’, and this basically describes the excellent sprinting lives of cheetahs compared to all other cats.

Their locomotive brilliance is what we are most familiar with; whereas, cheetahs have several adorable and slightly weak features that we might still need to get acquainted with.

Here are some interesting facts about our ‘cheat’ whose bionomial name is Acinonyx Jubatus:

1. Cheetahs are the fastest runners; they can cover up to 60 miles (0-90km/hr) in just three seconds.

However, compared to other cats, they get tired so easily after a heavy run because their hearts beat rapidly. This weakness does not make them the strongest runners.

2. Cheetahs are black-spotted like leopards; however, three major features distinguish them from leopards.

These are their small heads, stripy marks that run from a corner of their eyes down to their noses and mouths, and their narrow waists.

4. Where do cheetahs live? Cheetahs are mostly found in the Eastern and Southwestern parts of Africa and in some parts of Iran.

Namibia houses the largest number of cheetahs, having approximately 2,500 cats. They choose to live in the Savannah habitats and in vegetation that is dense.

5. What do cheetahs eat? Cheetahs don’t pounce and tear their prey immediately like all other carnivorous animals do. 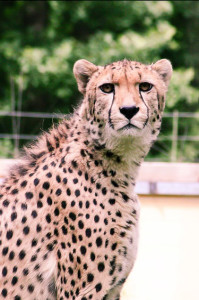 Instead, they bite the neck region of their prey suffocatingly for more than 5 minutes, and quickly eat it up before a powerful predator comes around.

Their prey includes wildebeest, antelopes, hares, calves, among others; their predators include lions, large eagles, hyenas and many more.

6. The gestation period for a female cheetah is three months and she can give birth to three cubs at a time.

After birth, the mother cheetah changes the environment of her cubs from time to time, in order to prevent attacks from predators. She does these changes majorly at night.

7. Aside from the protective measures devised by the mother cheetah for her cubs, a mantle, which is a yellow-gray coat, also grows on the back of baby cheetahs and makes them look like a honey badger (a very aggressive carnivorous animal that is feared by most cats).

Hence, at the sight of this appearance, most predators flee the cubs.

8. Unlike other big cats (lions as good examples) cheetahs do not roar; they chirp and purr.

9. Cheetahs are diurnal animals. This means that they hunt during the day and not at night.

At night, they do not have excellent vision like other cats do.

10. They can swim during the day, although they don’t usually desire it.

Moreover, to watch a cheetah climb a tree is like watching a tilapia fish swim on a dry field; cheetahs cannot climb trees. 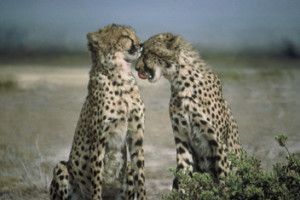 11. While running, Cheetahs are the only land mammals that can make a swift turn in the air.

Moreover, a cheetah uses its tail to propel itself to the direction it desires on a run. As a paddle is important to a canoe, so is the cheetah’s tail important to it.

13. A cheetah’s favorite food is a small African gazelle called Thomson’s gazelle. Also, a cheetah can survive without drinking water for more than four days.

14. Cheetahs are unsociable animals, although male cheetahs are sometimes found in groups, and are cooperative, compared to the females.

15. A cheetah is a symbolic representation of rapidity, insight and focus.

16. In recent times, the surviving population of cheetahs in the wild has been estimated to be within the range of 7,500 to 10,000.

Cheetahs are highly endangered cats and their majorly feared predators are humans.