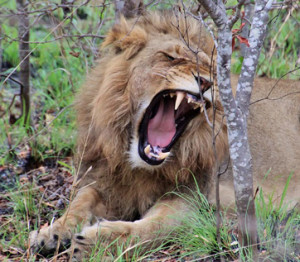 20 Interesting Facts about Lions You Didn’t Know (with pictures)

This post highlights interesting facts about the lion, commonly called the king of the jungle. It also provides amazing pictures that makes learning about the animal really fun for both kids and adults.

From their majestic look, poise, strength and agility, lions (scientific name: Panthera leo) are commonly referred to as “The King of the Jungle”, a title that reflects their conquering and domineering ability over other animals.

Most kids love lions, especially baby lions known as cubs because they look adorable. It’s always fun to visit a zoo to see lions and possible touch a cub.

There are many interesting facts about lions; however here are 20 you probably didn’t know, but which you will find amazing and fun; pictures of lions included:

1. Lions belong to the cat family of animals known as feline (Felidae), they are the second largest of the big cats behind the tigers.

2. They live in groups called pride, and are the only social animals of the big cat family, with the African lions the most social of them all. They seem to enjoy being together in a group and show lots of affection to each other by playing, touching, licking, purring, and head rubbing each other when resting.

3. A pride usually consists of 15 lions with most of them females and their young. One or two to three males may join a pride for up to three years if they are not replaced by other lions.

4. A female lion (lioness), which is smaller in size than the male, leads a pride.

5. Female lions do most of the hunting, but surprisingly, it’s the male that eat the prey first before the female.

6. Male lions are responsible for defending the pride’s territory. They will roar and use scent markings to declare their territory.

7. Female lions are nocturnal and are therefore able to hunt at night. They hunt in a team which makes it easier for them to get their prey. 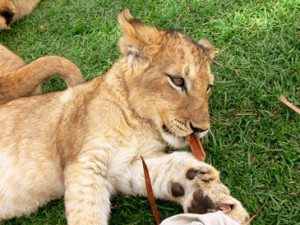 Picture 2: A baby lion known as a cub

8. Where do lions live? Lions live in grassland, savannahs, scrubs, and open woodlands and not the jungle. These habitats give them the space to chase and leap upon their prey when hunting.

Their being commonly called the king of the jungle may have come about from a wrong association of Africa with the jungle.

9. Lions were formerly found in Africa, Asia, and Europe, but today they are only found in Africa except for the Asiatic lions that are being protected at the Sasan-Gir National Park in India, which has about 350 to 400 lions in its custody.

10. In Africa, lions are now only found in the South Sahara desert and in some parts of South and East Africa and not the whole of Africa as it was before.

The population of lions in Africa has been reduced to about 21,000 from twice this number that it was in the 1950s, making lions one of the world’s most endangered animals.

11. When lions roar, the sound can be heard over a distance of 5 miles.

12. A lion can leap to about 36 feet, run 50 mph over short distances, and when it walks, its heels do not touch the ground.

13. Lions may have different colors; however, they are usually light yellow-brown with the mature male having a thick brown or black mane around its neck. The lion’s mane protects it from injury during fighting and makes it unique among other big cats.

14. You can guess the age of a male lion by the color of its mane. The darker the mane, the more mature the lion is.

15. What do lions eat? Lions are carnivores, meaning they eat the flesh of other animals they can hunt. They hunt several kinds of small to large animals for food, including hares, reptiles, giraffe, zebras, impalas, wildebeest, and buffalos.

Sometimes, they attack hippos and rhinos, and even elephants when they are hungry and can’t find other animals to prey on.

16. Lions mate all through the year. The female carries a pregnancy for 110 days (gestation period) before giving birth to 3 to 4 babies called cubs.

17. Young lions begin hunting from 11 months; however they remain with their mothers to avoid being attacked by black-backed jackals, hyenas, and leopards which prey on them. When they become 2 years old, they become independent and strong enough to protect themselves.

18. How long do lions live? Lions in the wild have a lifespan of between 10 to 16 years, while those in captivity or zoo can live for up to 30 years.

20. Lions do not always hunt for food; sometimes they steal food from hyenas and wild dogs using their higher strength and number to chase the food owners away.