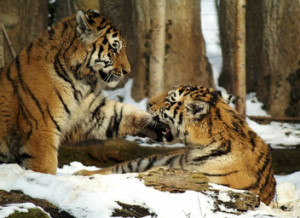 Picture 1: Tigers in the snow

18 Interesting Facts about Tigers You Didn’t Know (with pictures)

Tigers, with scientific name Panthera tigris, are undoubtedly some of the world’s most varied and magnificent creatures with interesting features and behavior that makes them adaptable to their habitat.

Their strength and predatory prowess in the wide have continued to be a source of inspiration and motivation to millions of individuals and firms across the globe, which have adopted the animal in their brand name or symbol.

Below are 18 interesting and amazing facts about tigers you probably didn’t know existed; they are also fun for kids:

1. Like the lions, tigers are also felines as they belong to the family of big cats and are the largest members of this group with an estimated population of 3,000 to 4,500 exist in the wild.

2. They have distinguishing appearance with white bellies, white and black tails, and long, thick reddish coats. They have narrow black, brown or gray stripes covering their limbs, heads, bodies, and tails.

The stripes are distinct for each tiger (no two tigers have exactly the same stripes.)

Those that can no longer be found are the Bali, Javan, and Caspian tigers.

4. What do tigers eat? Tigers are carnivorous and hunt animals for food. Wild pigs, ambar deer, antelopes, water buffalos are some of the common prey tigers eat.

Other animals they feed on include monkeys, crocodiles, dogs, leopards, pythons, wide boars, and sloth bears.

5. Tigers carry out most of their activities, including hunting in the night, which makes them nocturnal.

For successful hunting, tigers rely on their stripes as camouflage to ambush unsuspecting prey, knocking them down with their body weight and biting their necks until they die.

If the prey is large, the tiger may drag it to a thickset and cover it with leaves, and then come back later to eat it.

6. Where do tigers live? They live in various habitats, including ever green forest, tropical forest, mangrove, woodlands, grasslands, swaps, rocky country, and savannah.

They are also very good swimmers with the ability to kill their prey in the water.

7. Again, unlike the lions, tigers are not social animals. They live and move about alone unless when it’s the season for mating and when their females (tigress) just had babies.

They are however very defensive of their territories, which can be up to 100 sq km in size, and which they mark with their urine to warn off intruders.

8. Female tigers usually give birth to a litter of 2 to 6 babies known as cubs in a single birth after 103 days gestation period.

The cubs begin to follow their mothers out of the den when they reach 8 weeks after birth.

They become independent at the age of 18 months, and at two and a half years they would have become capable of hunting on their own and so leave their mothers.

Cubs are always close to their mothers for protection from the males who might kill them to make the mother available for mating.

9. A tiger’s most valuable asset is its canines, which it uses to tear off prey’s flesh when hunting. Combined with its body weight and strength, a tiger can kill animals that are more than twice its size.

A loss of its canines due to injury or old age puts the tiger in serious trouble. It will no longer be able to hunt and get food, and this could lead to starvation and death.

10.  The prey a Bengal tiger can kill in a year is equivalent to 30 buffaloes, and it can eat up to 21kg of meat a night.

11. Tigers can purr, but that’s only when they breathe out, unlike domestic cats that can purr during in and out breathing.

Having blinded the crocodile, the tiger then flips it over and kills it by biting off its soft belly rather than going for its neck which is protected by a thick armored skin.

13. The saliva of a tiger contains antiseptic, which helps to disinfect its wounds. This is why tigers lick their wounds when they have injuries.

14. Tigers wash and comb their fur with their tongue because the upper side of their tongue consists of fleshy bristles. Other cats also share this feature.

15. How long do tigers live? Tigers live up to 25 years both in the wild and in captivity.

16. Tigers have very strong legs that enable them to sprint at more than 60km per hour at short distances, leap over 6 meters, and jump vertically a distance of more than 5 meters. 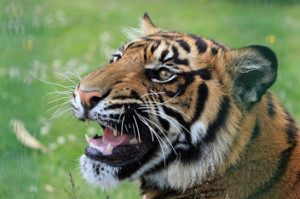 17. Tigers can go hungry for several days when food is scarce. However, they starve more quickly than most other animals because of their huge size.

A tiger will starve to death in two or three weeks if no food is found.

18. With their teeth measuring 10cm, tigers can bite through bones. They kill mostly by biting on the neck of prey, breaking their vertebrae and strangulating them until they are dead.