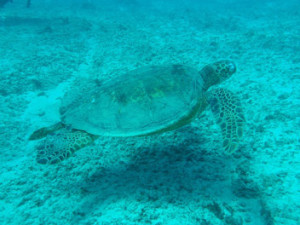 Though they live mostly in water, Sea Turtles need air to survive.

Sea turtles are among the world’s oldest animals. Their existence has been traced to over 100 million years ago in the age of the dinosaurs.

They are clothed with a shell whose upper part is called the carapace, and the lower part, the plastron, and which is streamlined to enable the turtle to swim in the sea effectively.

Here are some of the most interesting facts about the sea turtle you might not have known; kids will find them fun too.

1. Where do sea turtles live? The sea turtle’s habitat (where it lives) is both the tropical and the subtropical seas in all parts of the world.

They are reptiles and need air to survive. Even though they live mostly under water, they sometime come to the surface to breathe air for a few seconds.

They can sleep or rest submerged in water for hours.

Of all, it’s only the Leatherback that is not covered by hard scales (also called scutes). The number of scutes and the way they are arranged in each species can be used to differentiate them.

Leatherbacks happen to also be the largest amongst the sea turtles, measuring up to 63 inches and weighing about 1,500pounds.

3. One way sea turtles are different from other turtles is that they cannot pull back their heads and legs into their shells like other turtles.

4. What do sea turtles eat? Sea turtles eat various kinds of things, including jellyfish, shrimps, snails, seaweed, crabs, mollusks, algae, and sponges. What they feed on generally depend on the species.

5. Most sea turtles undergo long migration, such as migrating for as far as 1400 miles from feeding grounds to nesting grounds.

6. Sea turtles reproduce by laying of eggs. When it is time to lay eggs, females come to the shore and dig a hole in the ground with their back flippers.

This serves as a nest where they bury the clutch of eggs that they lay, which are usually between 50 and 200 eggs.

After hatching, it might take the young turtles a week to dig themselves out of the hole and make their way to the ocean. However, only a few of them live to adulthood.

7. Sea turtles are other animals like the salmon that come back to the ground where they were hatched to prepare a nest where their own eggs are hatched. 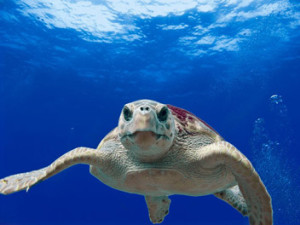 8. How long do sea turtles live? Though the maximum age sea turtles can live has not been established, it is however known that they live for a long time; some could live for 50 years and above.

9. Sea turtles are endangered by human activities such as fishing, hunting, and coaster developments.

They are usually caught in fishing nets and longlines during fishing, which results in most of them drowning.

Developments of coaster areas can cause destruction to nesting sites as well as having lights from building attracting young sea turtles, also called hatchlings, away from the ocean.

Increased human activities around coaster areas most times causes pollution of the water and introduction of plastics and other materials which turtles could mistake for food and eat, resulting in their death.

Also sea turtles are endangered in some countries where people hunt them for food (their flesh and eggs), and for their shells.