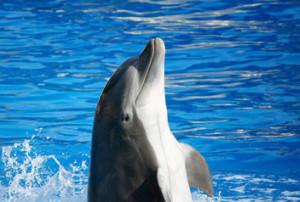 16 Interesting Facts about Dolphins You Didn’t Know (with pictures)

This post presents some interesting facts about the dolphin you probably didn’t know, with pictures to bring home the beauty and amazement of this well-loved animal.

A dolphin, unarguably, is an incredible marine creature. It is a marine mammal, and like the whale and the porpoise, it belongs to the order cetacean.

Dolphins have distinctive and amazing features, other than what most people see in it: a large fish-like dark gray and sometimes, brown creature that is marked with a white color pattern, and that leaps playfully out of the sea.

At a point on your adventurous journey across the globe, you might have had a view of these beautiful sea creatures, or taken a picture of their athletic moves in and out of water.

Nevertheless, here are interesting facts about dolphins which both kids and adults will find fun and educative:

1. Dolphins are not fish. They are best described as aquatic mammals.

2. Dolphins cannot breathe in water like fish; they will need to swim to the surface to breathe air.

3. Depending on the species, a dolphin has a gestation period of 12-16 months. A dolphin gives birth to one baby, known as calf, at a time; Twins are very rare.

Once the calf is born, its mother takes it to the water surface for it to have its first breath. Just like all other mammalians, a dolphin nurses its offspring with milk.

4. There are two classes of dolphins called Ocean dolphins and River dolphins. These two classes comprise 32 different species altogether, some of which are still unknown.

Because of the varying nature of these species, it has not been possible to make a factual estimate of their population. 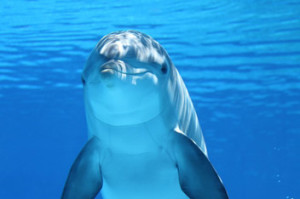 5. The largest dolphin in the world is the killer whale, which is also called orca. It can grow to be about 9.8m in length, and can weigh over 5,500kg.

The world’s smallest dolphin is the Maui’s dolphin which is a subspecies of the Hector’s dolphin; it’s about 1.4 meters in length.

A male dolphin tends to grow slightly larger than the female.

6. The most familiar types of dolphins are the bottlenose dolphins; they are those whose super athletic behaviors are commonly shown on TV programs.

How long do dolphins live? They have 20 to 25 years as their maximum lifespan.

7. What do dolphins eat? All dolphins are carnivores. They feed on smaller fish, squids and penguins. They have long snouts that hold approximately 100 teeth.

However, they don’t chew their food; they swallow it completely. In addition to drinking sea water, dolphins also take in water from the prey they eat.

8. Dolphins are highly intelligent sea creatures. Next to the human brain, the dolphin’s brain is the most powerful and complex brain in animals.

A dolphin has a folded cerebral cortex which aids proper processing of information.

9. A dolphin locates a prey in water by locating the sound made by the prey: a method called echolocation.

Moreover, dolphins have excellent eye sights with elastic lenses which expand and contract, allowing them to keep a focused vision both above and below water.

10. While sleeping, half of dolphins brain is kept awake to prevent them from drowning. It is this half that keeps them breathing.

12. Dolphins are cooperative. They live in a social group of five and several hundred called pods. They hunt together by surrounding and trapping a school of fish.

13. When a dolphin slaps its tail on water, it may mean a warning sign of danger to other dolphins or a sign of annoyance.

14. A dolphin has a completely smooth and hairless skin which allows it to move easily through water.

This smooth skin can also be sunburned to a great extent.

15. A dolphin is a symbolic representation of freedom, help and love.

16. Dolphins’ major predators are sharks and humans. Due to several human capturing activities that have been directed towards dolphins for several years, many dolphins are being protected by the Marine Mammal Protection Act to limit endangerment and prevent extinction.