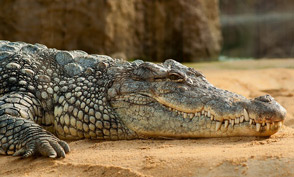 14 Interesting Facts About Crocodiles (With Pictures)

Crocodiles are members of the Crocodylidae family and belong to the subfamily crocodylinae (biological name), which is also referred to as true crocodiles.

Crocodiles are giant reptiles that can get to 5.2metres (19ft) in size.

Where do crocodiles live? They are aquatic in nature, which means that they live in habitats like rivers, fresh water, lakes, and brackish water and could be seen all through the tropics area in continents like Americas, Asia, Australia, and Africa.

There are 14 species of crocodiles that have been recognized whose habitat depends on the tropical area and the water they live in.

Crocodiles are amazing animals with interesting features and characteristics.

Here are 14 interesting facts about crocodiles you didn’t know before, which are fun too for kids:

1. History has it that crocodiles have been in existence since 240 million years ago.

3. It takes crocodiles much energy and effort to open their jaw than to close it.

4. The adult crocodile has 24 sharp teeth per jaw, which are used for griping, tearing, and crushing food, but not for chewing. The teeth could be replaced as many times as 50 within 35 and 75 years. They sometimes swallow stones to ensure quicker grinding of the food in their abdomen.

6. What do crocodiles eat? Crocodiles are carnivores in feeding, which means that they eat the flesh of other animals. They wait for their prey to come close, and then rush in to attack and feed on them; crocodiles feed on fishes, birds, mammals, and other reptiles, including their young ones.

7. “Crocodile tears”, a widely used term in English language, which means somebody is shielding tears but in pretense, was gotten from crocodiles displaying false tears while eating their prey. The tears occur because during the process of eating, crocodiles swallow great amount of air, which gets to the glands that produce tears and force it to flow.

8. Crocodiles reproduce by laying as much as 20 to 75 eggs. January and February are usually months for mating; then in April or May the female crocodile will build a nest of loose dirt in a heap on the edge of water and lay her eggs. Between July and August the eggs are hatched, she will assist the babies called hatchling to the water and there after leaves them to care for themselves.

9. Leaving the hatchlings to care for themselves exposes them to being eaten by big fish and other animals, including adult crocodiles. For this reason, about 99% of baby crocodiles lose their lives before the age of one.

11. Crocodile skin is used in making bags, belts, and other accessories, which are usually expensive. The belly part of the crocodile’s skin is more expensive and treasured for its quality and tenderness than the back skin, which is tougher with bonny structure, used in making bulletproof and other valuable accessories.

12. The crocodile’s olfactory system (responsible for smelling) is properly developed; this enables the animal to perceive the smell of prey far or near. It can also be said that they use this medium to know when their eggs are due for hatching.

14. Crocodiles have salty glands in their mouth, which makes them able to survive in sea water.

Crocodiles have 14 currently known species, they are: 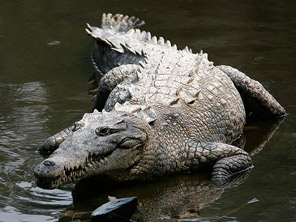 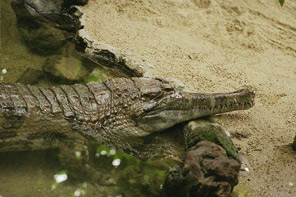 This can be found in Central and Western Africa.

It is of medium sized with an elongated and narrow snout.

It mostly eats fish, and sometimes also other vertebrates of small to medium size. 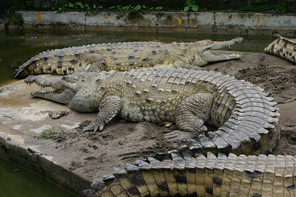 The Orinoco crocodile is found mostly in the Orinoco Basin of Colombia and Venezuela.

It is of large size with a pale tan color with dark brown markings scattered across its body. It’s relatively elongated snout notwithstanding; it preys successfully on large mammals, and many other vertebrates. 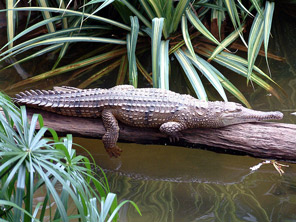 The freshwater crocodile is most found in Northern Australia and lives in rivers far away from the sea to avoid a fight with saltwater crocodiles.

It is a smaller sized species with an elongated and narrow snout.

Its color is light brown with dark bands scattered over its body and tail and feeds primarily on fish and other vertebrates that are of small size. 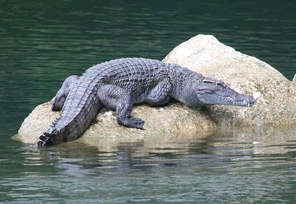 This species is mostly found in the Philippines and are relatively of small size with broader snout.

It dorsal armor is heavy and its color is golden-brown that gets darker as it matures.
Philippine crocodiles eat a wide range of vertebrates, from small to medium size, and have been flagged to being critically endangered, as well as being the most threatened of all the crocodile species. 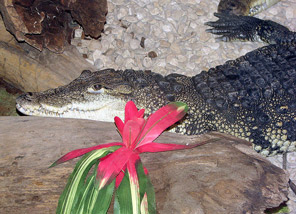 These crocodiles are found mostly in the Atlantic regions of Guatemala, Mexico, and Belize.

It had a rather broad snout, and is a small to medium sized crocodile

Its habitat is mostly in the fresh water environment, and its food includes reptiles, birds, and mammals.

It is dark gray-brown in color. 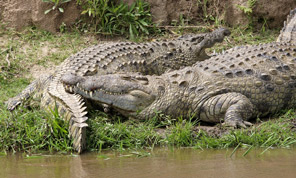 They are of large size with a broad snout, particularly the older ones.

They have dark bronze color, which darkens as they get older.

The Nile crocodile lives in freshwater environment as well as in brackish water.

It is a super predator with the ability to attack and capture various vertebrates, and predators, including large ungulates. 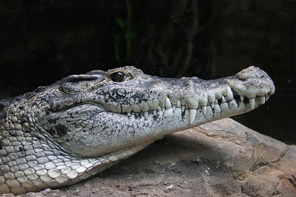 This species is found mainly in the island of New Guinea.

It is small sized species and has grey-brown color with dark brown to black markings on its tail.

Its habitat is both the freshwater and the saltwater environment, however, it usually chooses to live in freshwater to avoid being attacked and preyed on by saltwater crocodiles. 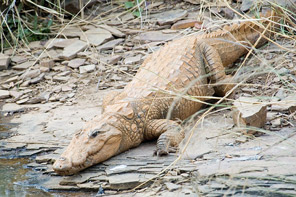 This species is found mostly in the Indian subcontinent and surrounding countries.

It has alligator appearance with a very broad snout.

A modest sized crocodile, the mugger species is dark-grey to brown in color.

It lives in slow moving rivers, lakes, and swamps, as well as in coastal swamps. It stays away from areas occupied by saltwater crocodiles and eats various vertebrates. 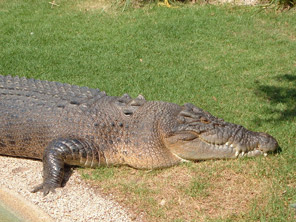 They are the most aggressive of all crocodiles and the largest known reptile.

They have a big head and a relatively broad snout, particularly in older ones.

They have pale yellow with black strips color at young age, which turns to dark greenish-drab when they become adult.

Saltwater crocodiles live in lower stretches of rivers, as well as in marine and brackish environments.

They are apex predators; they attack and prey on almost any animal within their surroundings.

This small, but extremely aggressive species of crocodile is found only in the Zapata Swamp of Cuba.

It has a vibrant color even as it gets older with its scales having a “pebbled” appearance.

It lives in freshwater swamps and also displays agile movement on land.

It feeds on small to medium sized vertebrates, and sometimes hunts larger preys when in a group. 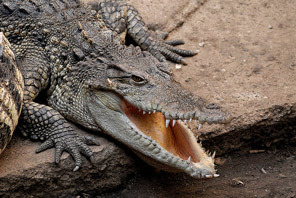 This species of crocodile can be found in Brunei, Indonesia, Southern Indochina, and East Malaysia.

It is fairly small in size and is majorly seen in freshwater habitats.

Its coloration is olive-green to dark green, and its snout is relatively broad.
Small to medium sized vertebrates constitute its food. 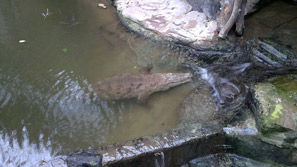 These crocodiles are found in Western and Central African regions.

They are much smaller than the Nile crocodile with a slightly narrower snout. 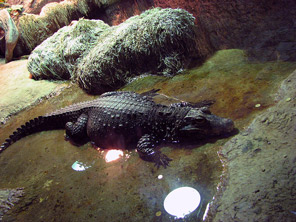 Dwarf crocodiles are found in the tropical forests of Western Africa region and are the smallest of all crocodiles.

The adult has uniform black color while the young is light brown.

If feeds on large aquatic invertebrates and small vertebrates and shows considerable terrestrial activities as it is well capable of hunting on land, particularly in the night.